Okonomiyaki from Kobe in Nagoya. What is the difference between [Kobe Rokkomichi / Gyunta] okonomiyaki?

First appearance in the Tokai area when the Dai Nagoya Building opened.What is Kobe-origin okonomiyaki offered at the famous Korean-style teppanyaki restaurant [Gyunta], which has been loved in Kobe for over 50 years?What is the difference from the okonomiyaki we usually eat?I will introduce its features and charms.While sitting at the counter seat in front of the iron plate and watching the cooking process, I found the essence of okonomiyaki of [Kobe Rokkomichi / Gyunta], which goes on an original road that is neither Kansai-style nor Hiroshima-style.

Contents of this article

The biggest difference is the so-called "oil residue", which is full of umami.In addition, the secret Korean miso "Yang Nin Jiang"

In order to explore the secret of okonomiyaki, we watch "Gyunta-yaki", which uses the store name in the menu name. [Kobe Rokkodo / Gyunta] okonomiyaki is not made by mixing ingredients and dough first, but by layering the ingredients on top of the dough. After putting all the ingredients on, the ingredients that I had never seen were topped.This is a rare ingredient, commonly known as "oil residue," which is a savory finish of beef fat.By adding this oil residue, the umami of beef fat dissolves in the dough, giving it a unique umami.Further attention is the "red jar" placed on each table.The secret Korean miso "Yang Nin Jiang" that has been passed down since its establishment is the recommended seasoning for [Kobe Rokkomichi / Gyunta].Not only for okonomiyaki, but also for yakisoba and teppanyaki, you can add it to all kinds of menus and eat it to complete the "taste only here".

After putting all the ingredients on it, top it with "oil residue".When cooked, the oil residue melts in the dough, enhancing the taste of okonomiyaki itself. 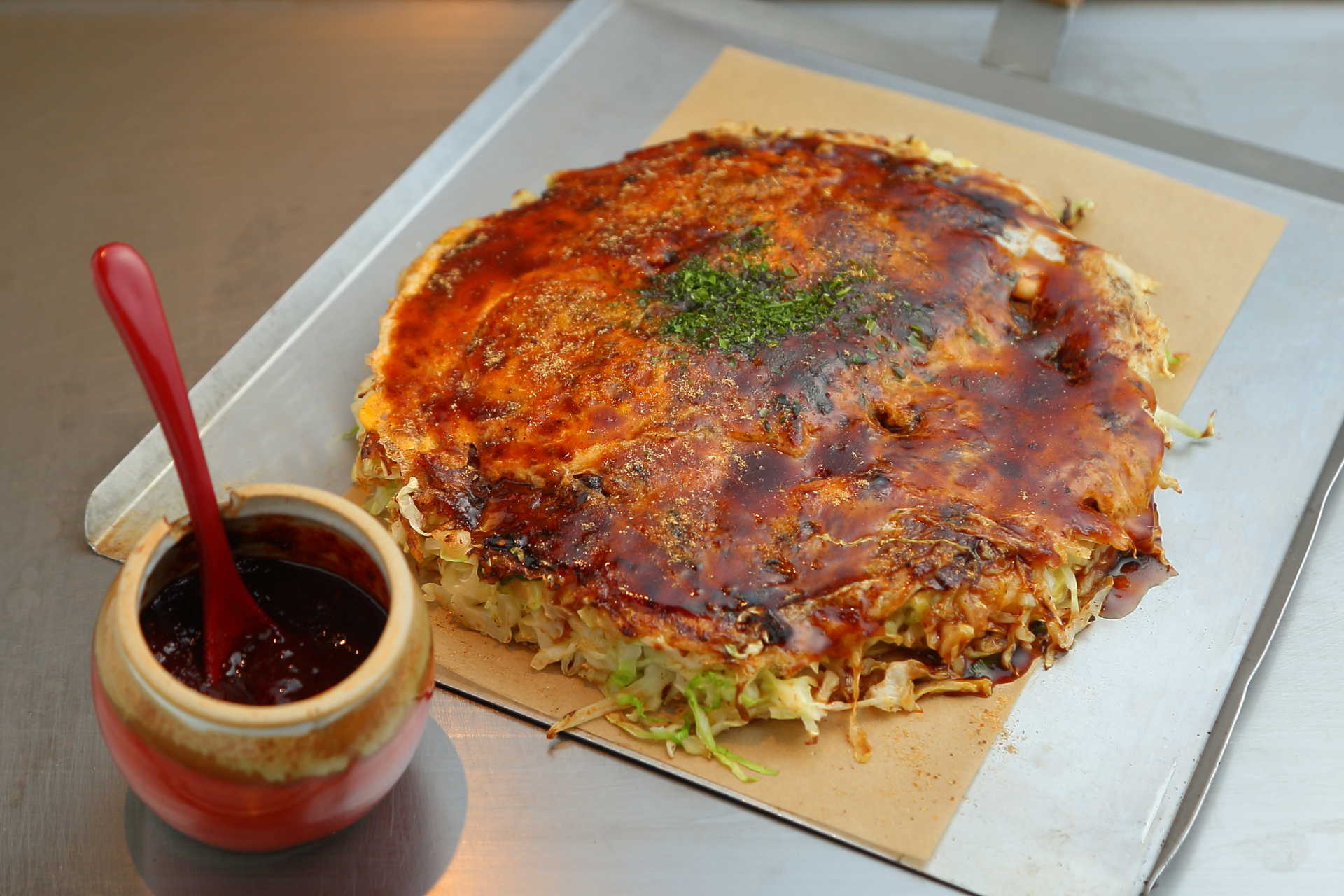 If this is your first visit, try this for okonomiyaki. "Gyunta-yaki" (Gyunta-yaki), a symbol of okonomiyaki from [Kobe Rokkomichi / Gyunta]1,408Circle).

[Kobe Rokkomichi / Gyunta]2Speaking of the second signature dish, "Gyunta Yakisoba" also bears the name of the restaurant.However, when making yakisoba, "oil residue" first appears.First, put "oil residue" on the iron plate and turn on the noodles when it melts a little.Put the bean sprouts and cabbage on top, cover and steam.Finally, season with sauce with the same steamed squid and beef tendon, and you're done.First, the noodles are coated with the umami of "oil residue", and the umami of each ingredient and the taste of the sauce are mixed there, and the fried noodles are finished to make you think "something a little different" from ordinary fried noodles. ..

Melt the "oil residue" on an iron plate, then loosen the noodles and entangle them.The moment when the unique scent of melting "oil residue" floats in the store. 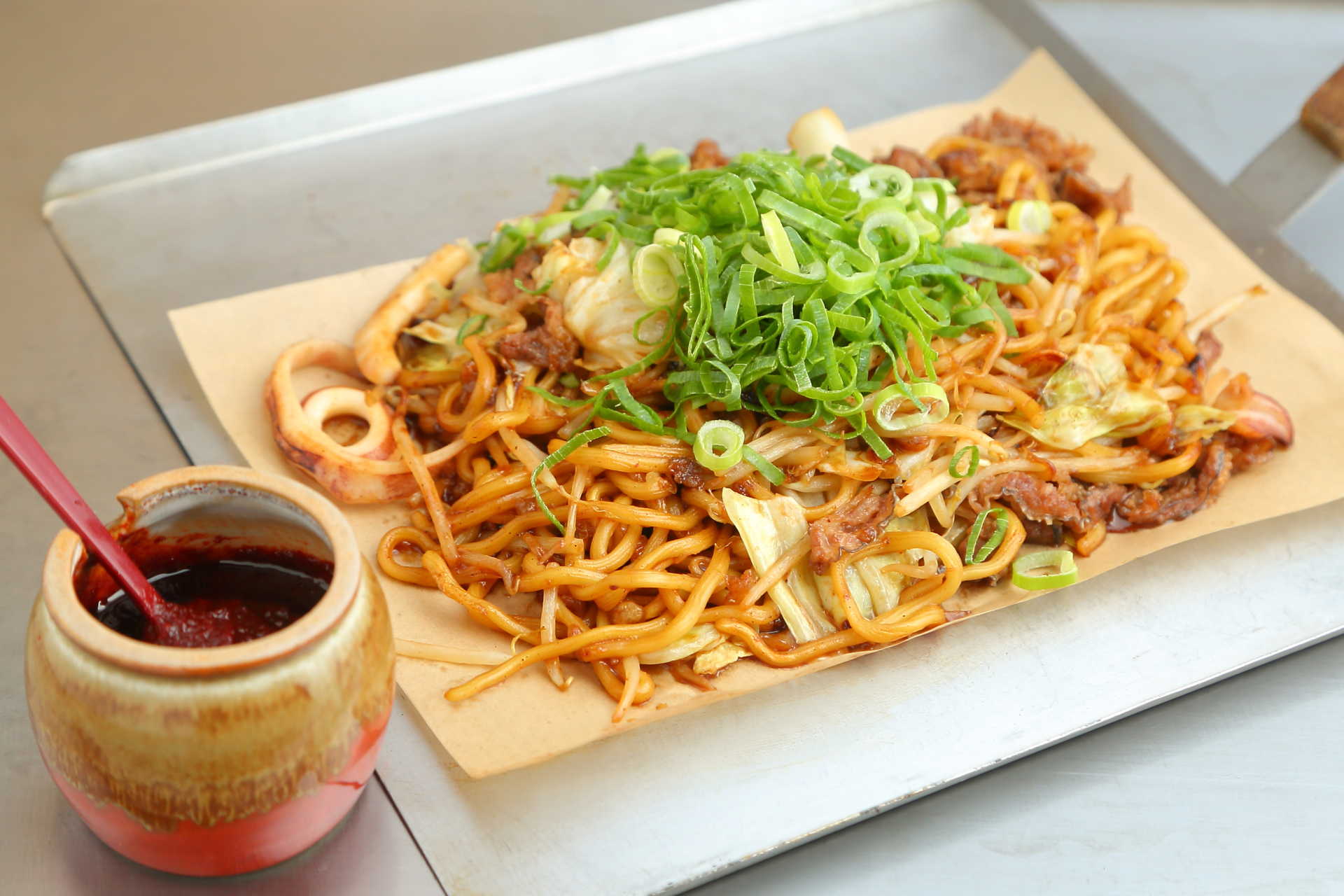 At the end of the three major dishes, it is no exaggeration to say that "the strongest sake knob" is "squid sujikon".

Lastly, I would like to introduce the famous squid sujikon, which I would like to recommend as a snack for sake.As the name suggests, it is a simple menu of squid, beef tendon, and konnyaku fried on an iron plate.By the way, the beef tendon of [Kobe Rokkomichi / Gyunta] refers to the "Agosuji" that is also used in "Gyunta Yakisoba", and this part is characterized by the strong flavor and texture of the beef.The seasoning is only salt and pepper and sesame oil, but it doesn't stop when you add chopsticks. Anyway, it's a dish that makes you miss beer.It is said that it will not be over-seasoned because it is intended to be eaten with the secret Korean miso "Yang Nin Jiang". Drink some teppanyaki menu items such as "squid sujikon" as a snack, and finish with okonomiyaki or yakisoba.That may be the most luxurious and standard way to enjoy [Kobe Rokkomichi / Gyunta].

Both squid and konnyaku create a sense of unity due to the strong umami of the agosuji. A specialty that is said to be "If you come to Gyunta, this is the first thing to do". 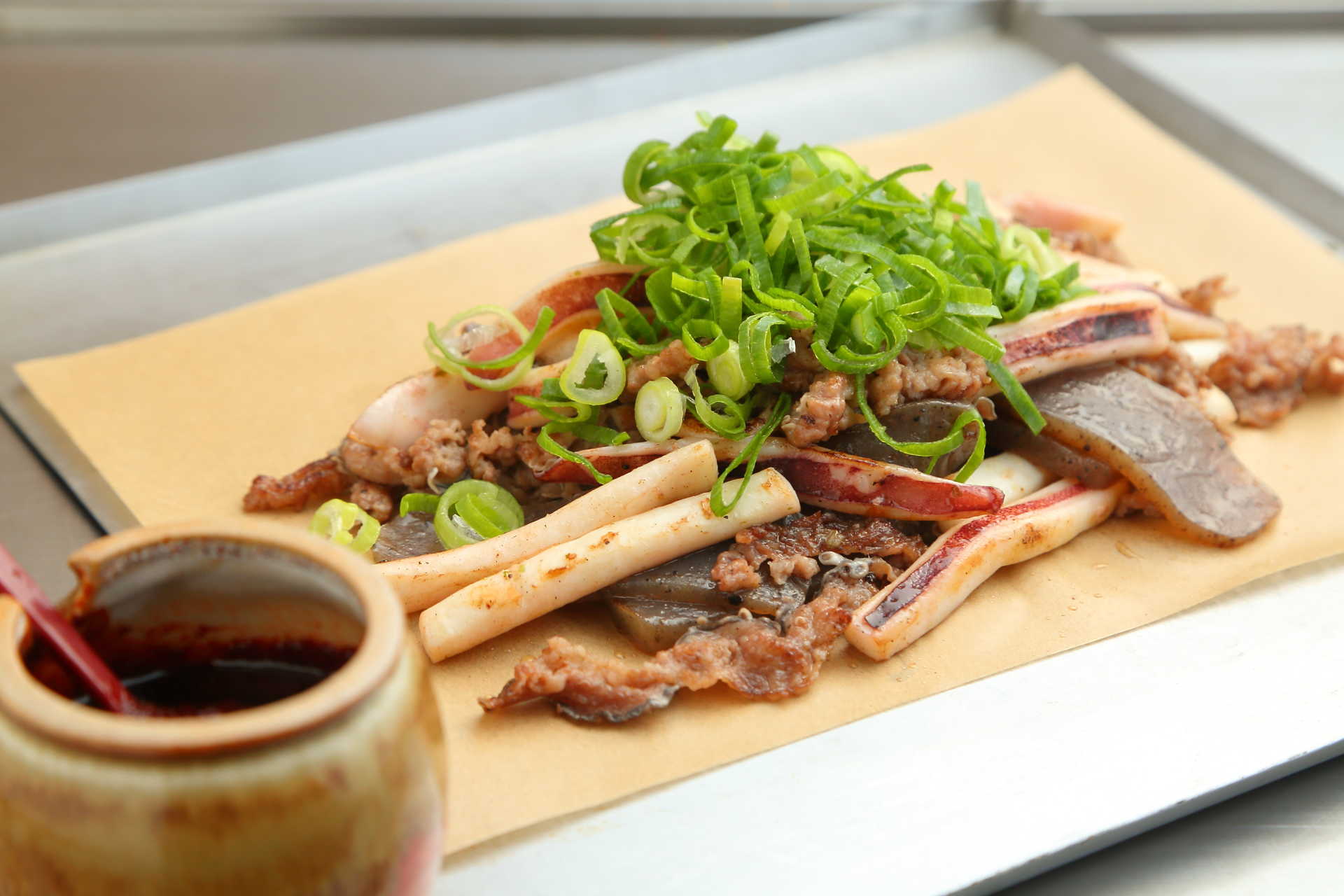